She lost work to the pandemic. Now she helps thousands of jobless Texans maneuver through the state’s unemployment system.

On a typical day, Alia Kirschner spends eight to 10 hours hunched over her phone, scrolling through the feed of a Facebook group from her home in Corpus Christi.

Sometimes, her boyfriend gets irritated with her. He’ll say things like, “Can you get off your phone, Alia?” But she’s too focused.

Her attention is on Texas Unemployment Updates, a private online forum with more than 24,000 members seeking information about navigating the state’s byzantine unemployment aid system in the age of the COVID-19 recession. Kirschner reviews dozens of new posts and member requests every day, offering guidance and tips to thousands of people struggling through a public health crisis and a weak economy.

“I'm getting desperate!” one August post reads. “I have bills coming soon and no money. It's been 7 weeks without any change. I've called, requested a call back sent email etc and no luck. Can anyone help!!??”

At 35 years old, Kirschner had no experience with the Texas Workforce Commission until her work as a personal shopper slowed down in April due to the coronavirus pandemic. Her son’s school, like many others in Texas, also ended in-person instruction, meaning someone needed to stay home with him. Both situations forced Kirschner to apply for unemployment relief.

“I think there's definitely a lot of shame involved because there's this whole idea of: ‘They’re just lazy, they just want the free money,’” Kirschner said. “I'll admit, prior to being on unemployment, I was like that. But here I am on unemployment.”

Texas’ statewide shutdown of businesses this spring pushed record numbers of Texans out of work. Hundreds of thousands of people who were suddenly jobless turned to the Workforce Commission for unemployment assistance, but the outdated and understaffed unemployment insurance office left countless Texans confused and frustrated.

Having never filed for unemployment before, Kirschner wanted to make sure she understood the system, so she combed through the Department of Labor’s and the Workforce Commission’s websites. She even read the federal Coronavirus Aid, Relief, and Economic Security Act Congress passed in the spring that would provide additional unemployment relief as the country faced the beginning of an economic recession.

Kirschner and her friends also scoured social media for help. They came across Texas Unemployment Updates, a Facebook group created during the pandemic with no ties to the Workforce Commission. The page included roughly 10,000 members when Kirschner first discovered it, she said. It has been a hub for people venting about financial distress and looking for emotional support.

In one October post to the group, decorated with heart emojis, a user said: “My appeal hearing is tomorrow morning and I was wondering if you guys could pray, manifest, just send positive vibes!! Getting approved would mean I get to help my gran with her house that is slowly falling apart.”

The group has also been a place where people swap job leads and ask questions about unemployment programs. The difficulties many Texans faced reaching the Workforce Commission throughout the pandemic left an opening for Texas Unemployment Updates to develop into a reliable resource for people to figure out how to navigate joblessness during the pandemic.

“There shouldn’t be Facebook groups for this,” Kirschner said.

The Workforce Commision, meanwhile, is mostly worried that such online groups could spur “the spread of incorrect or false information, or scams.”

“We encourage all Texans to verify any information through a legitimate TWC source,” an agency spokesman said in a statement.

Kirschner quickly became active in the group, sharing what information she’d collected from filing for unemployment herself and studying up on legislation, rules and Workforce Commission guidance. Eventually, she was asked to help moderate the page’s posts and gladly accepted, checking messages first thing most mornings after waking up her 9-year-old.

Now, she posts regular FAQs and prewrites emails for people who need to get in touch with the Workforce Commission about a specific problem, leaving blanks for them to fill in their personal information. If she’s ever stumped by a question in a post, Kirschner said she has leaned on a friend who worked in unemployment law.

“I might not always be right, but I'm going to try my best to give accurate information,” Kirschner said in an interview. “If you give someone the wrong information, it could literally mean whether they get approved or denied [for unemployment aid]. I don’t ever want to be responsible for somebody losing money.”

The unemployment system was tricky to navigate before COVID-19, but additional programs created by the CARES Act during the pandemic to financially support individuals came with confusing guidance and a host of acronyms and terms people had to learn to figure out what options were available to them.

In September, one user asked about pandemic unemployment assistance, a federal program created to help people professionally impacted by the coronavirus. The program is set to expire this month, and the group member was looking for information about potential extensions.

“Am I stuck just waiting for congress?” they wrote.

Kirschner replied that it was indeed set to expire and mentioned other programs the person could qualify for.

The federal relief from earlier this year had a shelf life that was intended to help prop people up through the summer, when congressional leaders expected the coronavirus to fade away. Renewing programs or creating new ones became a political football ahead of last month’s election, and Congress is still battling over how to provide more aid.

Now, the virus is worse than ever and the strong economic rebound Texas leaders hoped for has not happened. More than 3.8 million Texans have applied for unemployment aid since March, including more than 45,000 Texans in the last two weeks of November.

And the number of jobless Texans is likely higher than the numbers show, as the Workforce Commission has been unable to handle the constant demand of Texans seeking unemployment relief this year. The agency is still struggling to keep up — and Kirschner, who has taken over as the lone consistent voice of authority in the Facebook group for months, makes sure to post about the latest developments.

Jaymie Daniel keeps her notifications for Texas Unemployment Updates posts turned on to stay alerted for updates. A single mother of two, Daniel was laid off from her job as a maid cleaning homes in March.

“I had questions about a lot of things because it was hard to get a hold of unemployment,” said Daniel, who lives in Harker Heights near Killeen.

She found several Facebook forums, but after joining this one in June she quickly realized it was the most reliable page.

“I hopped in the group and started asking questions and it was great, people have been helpful,” Daniel said in an interview.

Recently, Daniel found a job as a shift manager at a car wash, but she still monitors Texas Unemployment Updates, and she has posted about job leads for other group members.

Maya Francis, 26, never thought she’d be collecting unemployment checks. Working at a high-end retailer in Houston, Francis lost her job at the beginning of the pandemic and heard about the Facebook group from a friend. Francis has posted questions about her delayed unemployment payments and commented on other people’s posts, including in September when another group member asked the page: “Anyone else just don’t know what to do right now? Financial uncertainty is scary.” 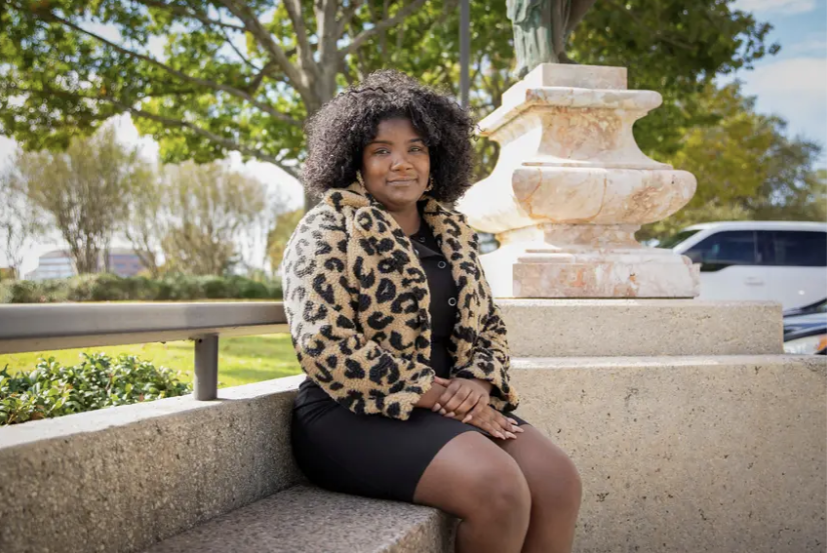 Francis’ was one of more than 300 replies to the post, a large network of peers she did not expect to find during a difficult year.

“It’s like a little community on there,” Francis said in an interview.

While keeping tabs on such a large group is nearly impossible for just one person, Kirschner has tried to maintain a safe space for people to feel comfortable. Members have shared intimate stories ranging from being evicted to entering homelessness. In one post, a member thanked Kirschner and the group for keeping someone close to them from killing themself after running into so many bureaucratic problems getting financial help.

“You answered questions and were always so professional,” they said.

“Oh goodness I hope they’re okay,” Kirschner replied. “I know it’s very dark times for some people but I hope they are seeing the light! Hugs to you and your friend!”

Disclosure: Facebook has been a financial supporter of The Texas Tribune, a nonprofit, nonpartisan news organization that is funded in part by donations from members, foundations and corporate sponsors. Financial supporters play no role in the Tribune's journalism. Find a complete list of them here.