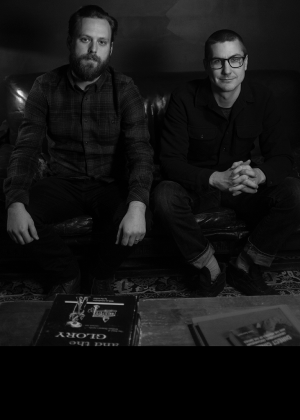 Nashville-based filmmaking duo Jace Freeman and Sean Clark (The Moving Picture Boys) showcase their developing style of documentary filmmaking in the "it" city of the South, rife with social issues needing to be explored. Reel South interviewed the filmmakers about their new film, Saint Cloud Hill, about a prominent Nashville tent community battling against the city's eviction efforts.

REEL SOUTH: What inspired you to make this film?

MPB: This film was the metamorphosis from a project we produced called Nashville Docujournal which was a collection of short cinematic stories happening within our community. We started in 2012 when Nashville started entertaining delusions of grandeur by highlighting a list of recent achievements but ignoring issues of affordable housing, dislocation and other growing pains. The idea was to make known stories of underdogs and various subcultures that were often overlooked in the images of the city projected by our tourism board. At the heart of the project was to connect diverse stories through a common thread of a shared identity and destiny.

In Nashville Docujournal, we documented an Occupy Nashville story of a man willing to camp on Legislative Plaza risking arrest to bring attention to housing rights. Examining the issue of affordable housing led us up a forested hill in a park downtown where the largest tent city had been established as a respite from the streets. On Saint Cloud Hill, we found a fatally flawed but a very real community that was a microcosm of the city as a whole. People were banding together and sharing what little resources they had with one another offering safety, security and a literal foundation to begin building back their lives. We found a story about place, belonging and community. We also found a man named Captain Chris Scott who had a quixotic vision to gain the mayor’s blessing and assistance to legalize the camp as a safe place not hindered by police to help people transition into housing. However, the city had promised the public land to a developer and eviction notices were given to the camp residents. This is when we started filming.  Chris had to not only sell his vision of a transitional camp to city officials in Nashville, but he also had to make sure to keep the harmony that allowed the camp to thrive as a community despite the growing pressures threatening to tear it apart.

REEL SOUTH: What makes this a Southern story?

REEL SOUTH: What were the challenges and blessings in making this movie?

MPB: We specialize in the narrative-nonfiction documentary style meaning that our narratives unfold in the present tense. So rather than using conventional documentary storytelling tools like interviews, photos, or archive footage, we are present to capture all of the elements of the story as they occur in real life. Naturally, the challenge is trying to anticipate when and where these story events will occur, and more importantly making ourselves available and present to capture the video and audio of those moments. Saint Cloud Hill largely revolved around an imminent eviction of our protagonists by law enforcement, so it was imperative that we be there when that eviction took place. This meant that we tried to have someone on location at almost all times. If we could not be there ourselves, we asked friends to be there either armed with cameras, or at least ready to call us just in case something happened. The blessing was that our hard work paid off. Our camera was there for the original eviction notice, the rally, the midnight police arrival, the deforestation, the infighting, the 9-1-1 calls, the court session, the highest celebrations, and lowest defeats. It truly is rewarding to put together a film in this style.

REEL SOUTH: How did the story change you?

MPB: Your perspective is broadened when you learn another’s story and become intimately acquainted with another’s struggle. Captain Chris Scott’s desire to restore a lost harmony in a city that he believes can and should be better definitely resonates with us as citizens of Nashville. Our hearts have grown larger and hopefully so has our capacity to share the yoke and bear the burden of others.

REEL SOUTH: What do you hope will happen after people see this story?

MPB: We hope that people will feel what we felt as we witnessed what happened on Saint Cloud Hill. We hope that it inspires, motivates and becomes an impetus for positive change. We hope that you empathize with the characters in the narrative and seek out further connections with them and the world around you.  Mostly going back to our guiding thought from Wendell Berry, we hope that you continue to learn one another’s stories, trust one another and help each other.